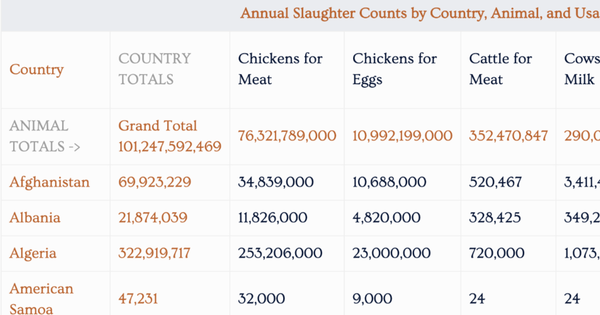 We now have a credibly sourced table showing the estimated annual slaughter counts of land animals by country, animal, and usage, with subtotals and totals. The table is derived from raw FAO data after a lot of reformatting and transposing to make it useful for advocacy. Although the latest FAO data is from 2017, it can be used as approximations of current slaughter numbers.

In advocacy, we should be cautious about barraging our interlocutor with stats and numbers, but when we do use them, it's good to know their source, especially when the numbers are unimaginably large. And the source should be credible. It's also good to be able to say exactly where one should go to see the numbers.

The gathering of large numbers can only produce estimates. The estimates are likely to be low because every slaughter cannot be counted. But the FAO does go into detail about the methodology used to produce these numbers, as provided by a link on the cited page.

Here is how this table came about: (—Greg Fuller)

Months ago, I looked for a table showing the number of land animals slaughtered by country, species, and usage (e.g, Meat, Milk, or Eggs). I had seen various individual numbers quoted on various web sites, but I had never seen what I thought would be the most useful: a table with one row for each country and one column for each species and usage.

Furthermore, these individual numbers were often without any indication as to source, and sometimes with only a secondary source. Other times an organization was cited as the source without providing specifics.

After some research, I found there was a single source for such data: the Food and Agriculture Organization of the United Nations (FAO). The FAO maintains data sets and publishes the methodology on how the stats were derived. The latest FAO data on animals slaughtered is from 2017.

This was a good find, but the data was not presented in a way that could be easily consumed. It would take a lot of reformatting and transposing to make it presentable. There was a lot of data, and doing this manually was a multistep process that could have taken days or weeks. So I starting writing a program to take care of one of the steps in this process. The program would transpose data in a spreadsheet. Due to other demands on my time, I hired someone to finish the program. The program is reusable, so if the FAO releases new data for more recent years, we can post a table for that.